You are here: Home / Parenting Is Hard Enough / My Teen Asked Me About A Sex Act While I Was Driving

I knew this day would come as I had been warned by those who had gone before me.

She’s going to have questions.

You need to get your story straight.

You have to be *prepared* because you’ll be caught with your pants down when the Fruit Loops ask about the specifics of sex.

And, in a dark car, on the way home from dinner, it happened:  Fruit Loop #1 and I had a whopper of a conversation. 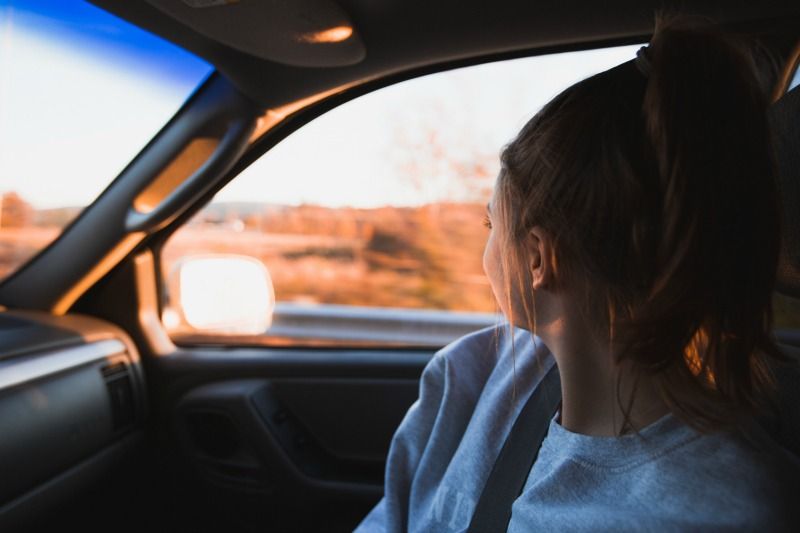 I had no idea that my teen was about to ask me about a sex act on the way home from dinner.

While I’ve mostly recovered from the trauma, my friends are still reeling from the advice I gave him.

The evening started out innocently enough. After attending an event as a family, Hubby and I decided to take the Fruit Loops out for dinner at one of our favorite watering holes (read:  drink martinis as the Fruit Loops consumed large quantities of fried foods and dessert). We spent that time talking to each other, visiting with friends who’d also gone to the restaurant and joking with our favorite bartender.

It was a picture perfect moment:  warm sweaters, noisy atmosphere, a family smiling together. I had no way of knowing that Fruit Loop #1 had questions brimming and he’d decided he was going to get some answers on the way home.

Once in the car, and about two seconds after I navigated the car away from the curb, Fruit Loop #1 dropped a bomb on me: there was a sexting scandal at school and he was upset.

Let me repeat that:  my twelve year old was upset about a sexting incident. Twelve. As in, they don’t even have the word “teen” in their ages yet, bitchachos.

Pardon me as I try not to drive this people mover right into a tree.

While he was not involved (THANKYOUSWEETBABYJESUS), he was upset about the consequences, the children involved, and the general implications that this kind of thing brings. He wondered what would happen if he received salacious texts, who he should tell, why kids would do such a thing.

Heavy topics weighed on his mind and he wanted to talk about all of it. WITH ME. As I was driving heavy machinery. In the dark. Without Hubby as a back up.

I’m not going to lie: I was caught with my pants down and I swear, the deer we passed on the road did not look nearly as surprised as I did when I was driving.

But, I made a choice to keep driving, to take the longest way home possible because my tween was talking, openly talking to me about sex. I didn’t know when, or if, this situation would ever present itself again.

I don’t know if it was the dark, country roads I slowly drove, the fact that we weren’t facing each other or if the stars just magically aligned to make him open up, but it happened.

And it was eye opening.

As we quieted from the sexting discussion, he coyly and shyly said, “I have one more question,” and the tone of his voice made me realize I needed to brace myself.

Holy Sweet Mother in the heavens above, I don’t think I’m going to survive the teen years.

Here I was, in a car, being asked a specific question about a sex act from my twelve year old.

In the split seconds that followed his question, I debated:  do I tell him?  Do I push it aside and tell him that’s for grown ups? Do I pull over on the side of the road and call Hubby to take over?

How hard will I have to junk punch Hubby when I get home?

I honestly didn’t know what to do and, as I gripped the steering wheel and tried to keep myself from driving into a cornfield, I made a decision.

I told him. I was honest and forthright.

And, then it was him wearing the deer in the headlights expression.

As the reality of the answer set in, and, realizing these moments with tweens are fleeting, I took it one step further:  I told him a committed relationship is a two way street and when you are intimate with someone, it’s never one sided. If he’s alone with a girl, it’s to be enjoyable for both of them and it’s never okay to let a girl please him solely.

I told him that if you get one, you give one.

Because no daughter in law of mine is going to stand in my kitchen and wonder why he’s such a greedy asshole in the bedroom.

And, judging from the looks of horror on my friends’ faces as I’ve recounted this story, I seem to be in the minority when it comes talking openly with kids about sex.

I’ve been accused of condoning pre marital sex. I’ve been told I crossed a line by explaining the specifics of a sex act to my child.

I’ve been told that I’m asking for trouble by telling him that his eventual girlfriend’s needs are important, too.

Mostly, though, my friends have cry laughed at the image of me driving down the street being asked about knob polishing. And, naturally, they all asked how soon I’d be blogging about my drive from hell….

But, for all the judgement, all the shocked outcry, I stand by what I told Fruit Loop #1. I stand by my honesty and I hope, that in doing so, I’ve set the stage for him to want to come back to ask questions, to get good, solid answers from his father and I.

And, in that moment, he trusted me with his thoughts and was open and honest with me.

The least I could do was be honest right back.

Because if you get it, you give it, people.